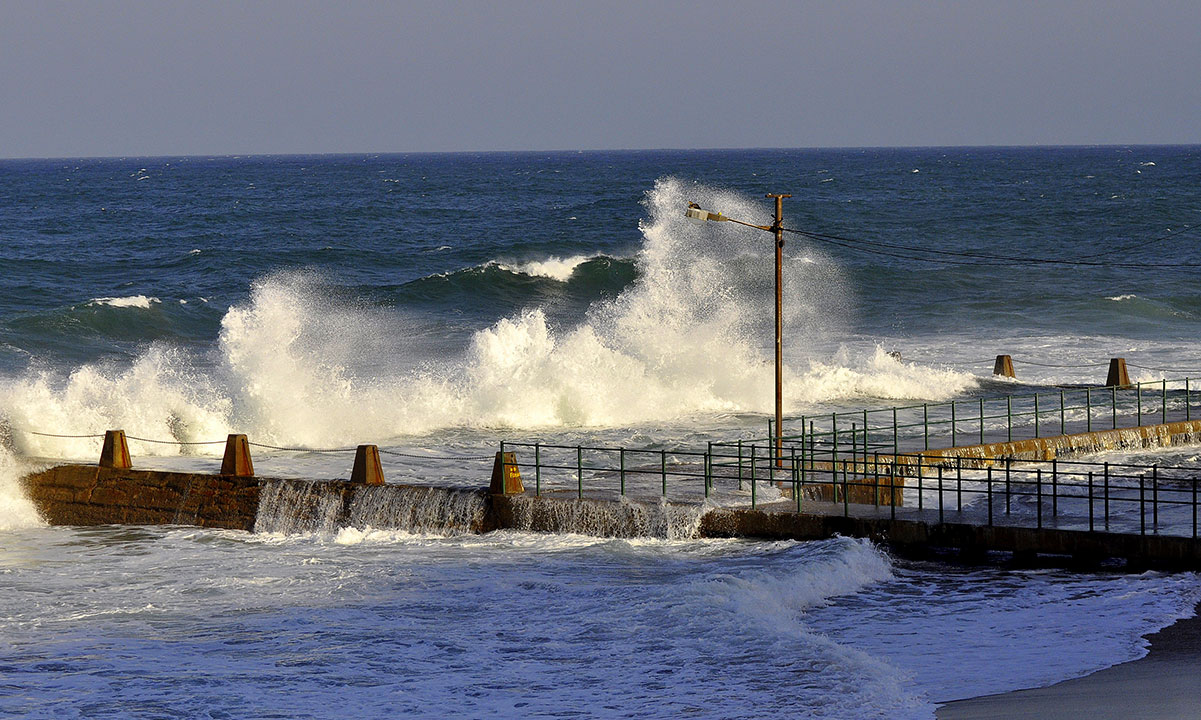 Tidal pools are open air man-made structures built on headlands by enclosing parts of rock shelves or on the edges of beaches filled with ocean water. Many of these pools exist as separate entities at low tide only.

They have a wide variety of forms. In some of them, only a rough wall separates the pool from the ocean. In others, a simple concrete basin is sunk into the rocks. Tidal pools make advantage of the tides. At high tide they fill up, flood and become inaccessible. At low tide they provide a sheltered environment for vulnerable visitors and experienced bathers alike from the unpredictable motions of the ocean.

Durban’s tidal pool on Brighton Beach borders on the world renowned Cave Rock surf spot and is an icon to all.

Cave Rock dishes up one of the best and most dangerous surf breaks on South Africa’s coastline. Enthusiasts from around the world come to ride the perfect tubular waves when large southern swells break across the reef. At low tide, Cave Rock offers numerous calm rock pools for children to explore the subtropical marine life. There are dolphins aplenty and shark nets in place, but of course, there is the occasional scare - and you must know, there are some very big bad boys out there.

Apart from providing protection against powerful currents, tidal pools provide protection against massive waves, jellyfish and sharks. Quite a number of tidal pools were built along Natal’s coast during the early 1950’s after the occurrence of a relatively large amount of attacks on bathers and surfers alike. South Africa currently has about ninety recorded tidal pools along its 2800 kilometre coastline, some better maintained than others. Most of them are located in the more developed coastal areas.

If left neglected and abandoned, they can harbour an extravaganza of marine life such as anemones, barnacles, crabs, mussels, sea stars, shrimps, sponges and tiny octopi which nestle there after being washed up by the tides. Baby sharks are often propelled over the walls by the waves. Despite the development of chlorinated and heated pools, tidal pools remain a popular form of recreation in South Africa.

The tidal pool on Brighton Beach was commissioned by the Durban City Council and officially opened in 1938. It was an impressive, floodlit affair. In those days, Brighton Beach was already a favourite picnic hot spot, attracting even more visitors after its completion. With protected open spaces and no high rise to spoil the coast line, it still maintains an environmental awareness that has prevented this area from becoming yet another concrete holiday town.

In March 2007, a massive storm struck the coast and caused severe damage to the immediate environs. The pool was one of its casualties and it took a pretty heavy beating. It has since been repaired, withstanding the continuous huge poundings from the ocean as ever before.

My thanks to Tash and Rudy Palmboom from Ansteys Beach, Alan Dean from The Bluff and MaryAnn Grafetsberger from the Durban City Hall Secretariat for their contributions.