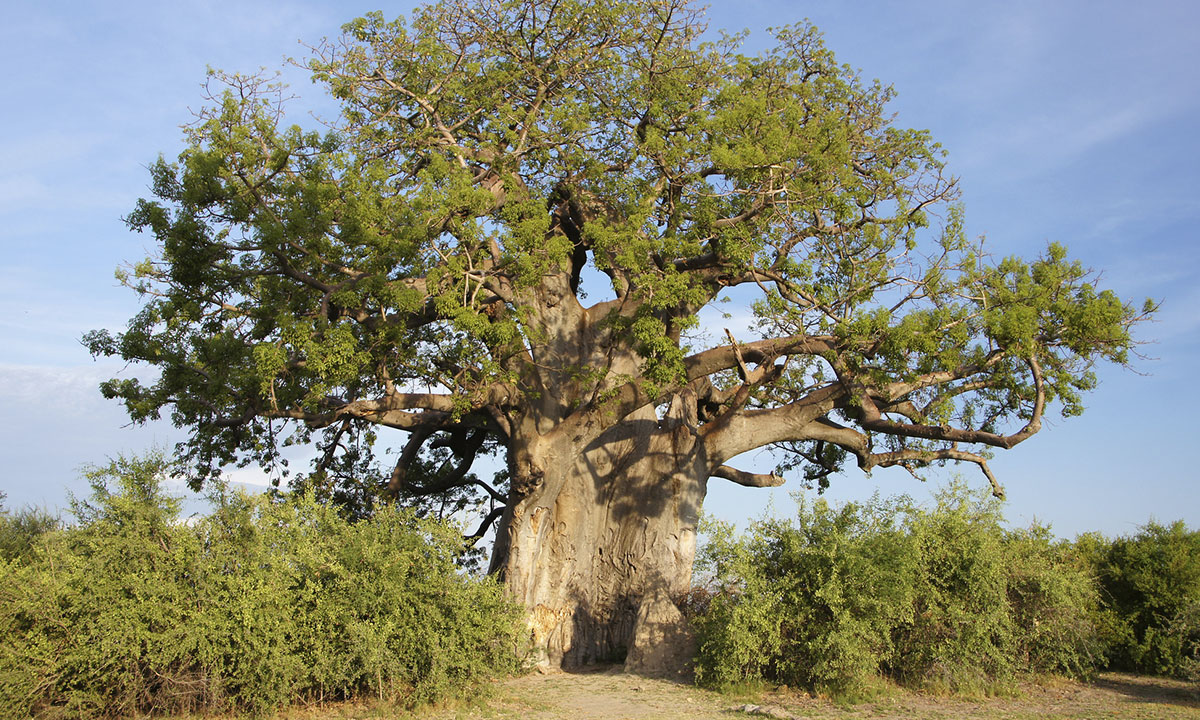 The design of the baobab is truly as iconic as it is unique.

Baobabs are sacred in African culture and treated with respect in most places. They are considered to be the mother of all trees and can be found in the open savannahs anywhere between Mauritania, Eritrea, Madagascar and South Africa, around the heart of the continent. They stand out because of their unusual barrel-shaped trunks and thick tapering branches on the top and none on the lower parts of the tree. Baobabs have been around for millions of years, when there was only nature. They are exceptionally slow growing and possibly one of the oldest living life forms on Earth.

African baobabs reach heights of up to 22 metres (72 ft) and blossom from late spring to early summer. Their large, whitish flowers emerge from large round buds on long, drooping stalks in the late afternoon, permeating a strong musky scent. This attracts a variety of birds, moths and bats, the tree’s main nocturnal pollinators. The life of the flower is short-lived and falls to the ground within hours. Their leaves are dropped during the winter months and reappear in late spring. The flowers and fresh leaves are relished by people, livestock and wild animals alike.

The flowers and leaves are used in salads in local dishes. The white pulp of the fruit, about the size of a tiny rugby ball, can be boiled to an invigorating drink with a flavour reminiscent of grapefruit, pear and vanilla. It covers the dark seeds contained within. When the fruits fall to the ground, they are fed upon by baboons, monkeys, antelope and elephants, with whose aid the seeds are dispersed. When roasted, they make a good coffee-like drink. In addition, the baobab’s flowers, fruits, leaves, seeds and roots are known to cure a range of maladies in traditional African medicine.

Baobabs survive in areas with very different rainfall averages and can withstand successive years of extreme drought as well as raging floods. Their barks and huge stems are difficult to burn because of the sometimes extraordinary amounts of water contained within. They provide water for animals and people and are home to hundreds of birds, insects and small mammals. Hawks and owls feed upon the field mice that live among their roots.

Rainwater, if any, collects in the clefts of the large branches and people and animals use this valuable source of water. Baobabs can be purposely hollowed out in the centre to serve as reservoirs when rain eventually does fall. A hole is drilled in the trunk and a plug inserted so that the water can be easily retrieved. Their roots can also be tapped.

The strong fibre from the cork-like bark is used for making baskets, clothing, hats, mats, hunting tools, fishing nets and lines, strings for musical instruments, sacks, paper, rope and as roofing material. The bark also serves as food for elephants during dry spells. Sometimes they savagely attack trees for their soft, spongy wood.

Some baobabs have their own individual names and stand out as landmarks for villagers, nomads and other travellers. When baobabs are about a thousand years old, they tend to hollow naturally, exposing layers of bark of up to 2 metres (6.5 ft) thick. These larger specimens are known to be used as bars, bus and taxi stops, burial sites, homes, dairies, temporary shelters, shops, meeting places, places of worship, of crime, hiding and romance, prisons, stables and storage barns.

A number of baobabs are believed to be 5000 years old, or more. They can be torched to smoke out bees, stripped off their barks, gauged upon by wild life, chopped down or blown over in storms, yet they have the ability to simply continue growing and regenerate. When they eventually do die, they suddenly collapse with a thud to the ground, leaving behind just a pile of soggy fibre shavings that disappear from the landscape within in a matter of days.