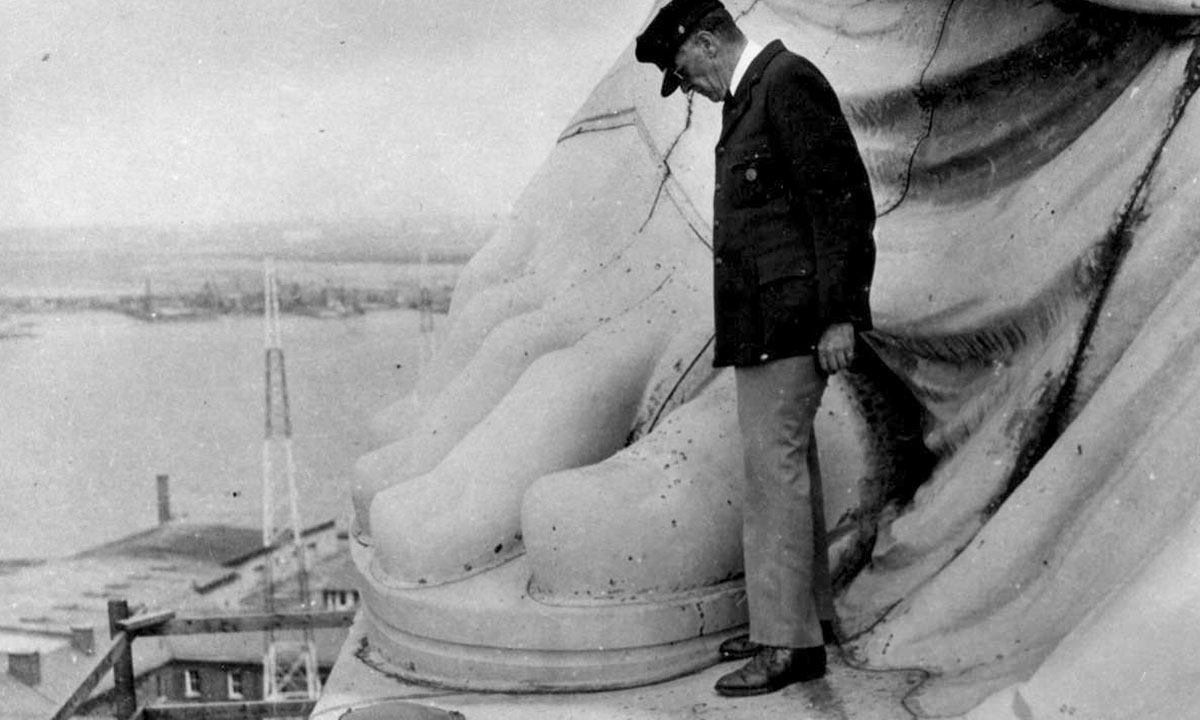 One of most iconic women in the world is undoubtedly Lady Liberty on Liberty Island in New York, also known as the Statue of Liberty. She is around 132 years old by now, stands at a full 93 metres, and wears size 879 Roman sandals.

She does not stand alone. Other examples of disproportionate big feet in art can be seen in the figures of Auguste Rodin’s ‘Burghers of Calais’, Charlie Chaplin’s oversized shoes, Pablo Picasso’s ‘Les Demoiselles d’Avignon’, Joan Mirό’s ‘The Farmer’s Wife’, Willem de Kooning’s ‘Clamdigger’ and Alberto Giacometti’s works from 1947 onward. Amongst others, they also feature in African art by the Sao from Chad, the Bamama from Mali and the Chokwe from Angola.

The Swiss-born Alberto Giacometti (1901 - 1966) was a truly remarkable artist best known for his images of isolated post-war existence.

After having attended art school in Geneva, Alberto moved to Montparnasse in Paris in 1922, the hub of the avant-garde, where he experimented with interpretations of tribal art, Cubism and Surrealism. Within a few years’ time, he was introduced to the Surrealists and became one of their leading sculptors. After an acrimonious break with them in 1934, he re-engages in making art from life. His sitters are mainly family members, especially his younger brother and lifelong companion Diego, friends and a string of professional female models. In 1935, he meets a young and vivacious artist from London, Isabel Nicholas, who becomes his lover, close friend and occasional model. Alberto concentrates on sculpting intriguing portraits and busts, focusing mainly on the sitter’s gaze.

In 1938, he was involved in a traffic accident which would have a profound and lasting impact on his life and work. One Monday afternoon in October of that year, Isabel came to Alberto’s studio to sit. The same evening they went out for dinner and afterwards he walked her back to the hotel where she was staying. In the early hours of the morning, on the way to his studio, he passed the Place des Pyramides, a small square opening to the Jardin des Tuileries with in its centre a life-size gilded bronze equestrian statue of Joan of Arc. Round the base of the high pedestal is a pavement barely two metres (six feet) wide. That is where Alberto was, standing in front of the statue, admiring it.

Suddenly a car came speeding along, swerved toward him, careened onto the pavement and hit him. He was knocked down, the car hurtled onward and a shattering crash followed. It had gone in under a nearby arcade and smashed right through a shop window. The driver of the car, freed from the wreck, was a drunken woman from Chicago, a certain Mrs Nelson. Alberto wanted to return to his studio, but the police insisted that they both be taken to the hospital to see whether either had sustained any injuries. The woman was unharmed. Alberto’s fate was far more serious. He was immediately hospitalized when it turned out that the arch of his right foot had been severely crushed. To avoid further complications, surgery was not recommended so the broken bones were set and a cast was applied, requiring months of healing and recuperation. He was released a week later, on crutches. Though he could not have foreseen the future, he was right in thinking that his life had taken a decisive turn. The injured foot would leave Alberto with a lasting limp.

He gradually picks up his work and continues where he left off before the incident. The injury had meanwhile acquired mythic proportions for him, becoming the source of physical complaints and the rationalization of having to rely on crutches as extra legs. He had to reconsider the problem of walking and subsequently his sense of balance. One can hardly ignore the importance of the outsized rooted feet with which he would later endow so many of his sculptures.

In 1940, his portraits and figures become increasingly smaller and are mostly made from memory. After the German invasion of Paris, he flees to neutral Geneva with Diego. His work shrinks even further in size, as impossible as this may seem. There he meets Annette Arm (1923 - 1993), an aid worker for the Red Cross, and they become friends. Alberto returns to his studio in Paris in 1945, which is fortunately still intact, carrying a half a dozen or so matchboxes with in them the miniscule work he made in the intervening years. Annette joins him in 1946. She was keen to leave her parent’s house and see more of the world. Although she needs to come to terms with Alberto’s primitive living conditions, she stays with him and remains one of his principal models for the rest of his life. He recommences painting and the first signs of what would become his trademark elongations appear in his work.

His sculptures become taller, thinner and frailer. His male figures begin moving, walking and pointing whereas his females remain standing stock-still, as if frozen. Sometimes they are not given any feet at all and their lower limbs are merged with the pedestals instead, leaving them seemingly entrapped and immobile. Male and female figures are rarely combined in his work. One night in October 1947, between midnight and nine in the morning, Alberto makes ‘L’Homme au Doigt’ (Pointing Man), a 1.77 metres (5 feet) tall, almost skeletal standing male gesturing with his left arm and pointing with his right. There are no clues as to what he is pointing to, or why.

Pierre Matisse, Henri Matisse’s youngest son, stages a hugely successful exhibition of Alberto’s work in his New York gallery in January 1948. The accompanying catalogue contains a preface by the French philosopher Jean-Paul Sartre (1905 - 1980), titled ‘The Quest for the Absolute’, on the artistic impact of his art, representing the fragile and essentially lonely nature of human endurance. The exhibition heralds the rise of Alberto’s reputation in the English-speaking world. A never-ending string of highly publicized international exhibitions and retrospectives follow from then on. In 1956, he exhibits a series of ten circa 1 metre (3.5 feet) tall sculptures called ‘Femmes de Venise’ (Women of Venice), together with six other sculptures in the French pavilion of the Venice Biennale, consolidating his international reputation as one of the most respected artists of his generation.

In 1960, Alberto makes ‘L’Homme qui Marche - I’ (Walking Man - I). It is 1.88 metres (six feet) tall and depicts a life-size lone man in his stride, his right foot jutting forward, his head erect and his arms hanging at his side. It was intended as an entry for a competition financed by the Chase Manhattan Bank in New York to place a monumental sculpture on the square in front of their new skyscraper. He creates three sculptures for the project of which ‘L’Homme qui Marche - I’ is one. The other two are a standing woman and a large head on a pedestal. He struggles with the conditions and then withdraws from the competition.

His star rises even further when he is awarded the prestigious Grand Prize for Sculpture at the Venice Biennale as well as the Guggenheim International Award for Painting in 1962. A major retrospective exhibition of his work is held at the Kunsthaus in Zürich which afterwards travels to various destinations around the world. In 1965, when he is in really poor health, Alberto receives an honorary doctorate from the University in Bern and the Grand Prix National des Arts from the Ministry of Cultural Affairs in France. A few months later he passes away in a hospital in Switzerland.

All in all, Alberto produced more than 5000 works of art, the majority of them originating from his shabby 4.5 x 5 metres (15 x 16 feet) mezzanined studio in Montparnasse. He occupied the same place for forty years, from 1926 to till his death in 1966. Unlike many other artists of the period, Alberto’s studio contained no artefacts or collections of other artists’ work, just his own. Many famous people visited him there, including Pablo Picasso, Igor Stravinsky, Marlene Dietrich, Samuel Beckett, Jean Genet, Simone de Beauvoir, Balthus and Francis Bacon. His furniture consisted of no more than a stool, a battered table, a potbellied stove and a small tree growing up through the floor. The walls were covered with a profusion of studies and the remainder of the space was filled with art in progress. He also lived there with Annette, whom he marries in 1949. Even after fame and fortune had reached them, they never moved. The building complex, in which his studio and adjacent storage spaces were once located, no longer exists today.

My thanks to Mrs Martha Degiacomi from the Pierre Gianadda Foundation in Martigny, Switzerland, for her contribution.

The image is of a New York Harbour Official standing next to Lady Liberty’s right foot, circa 1928.