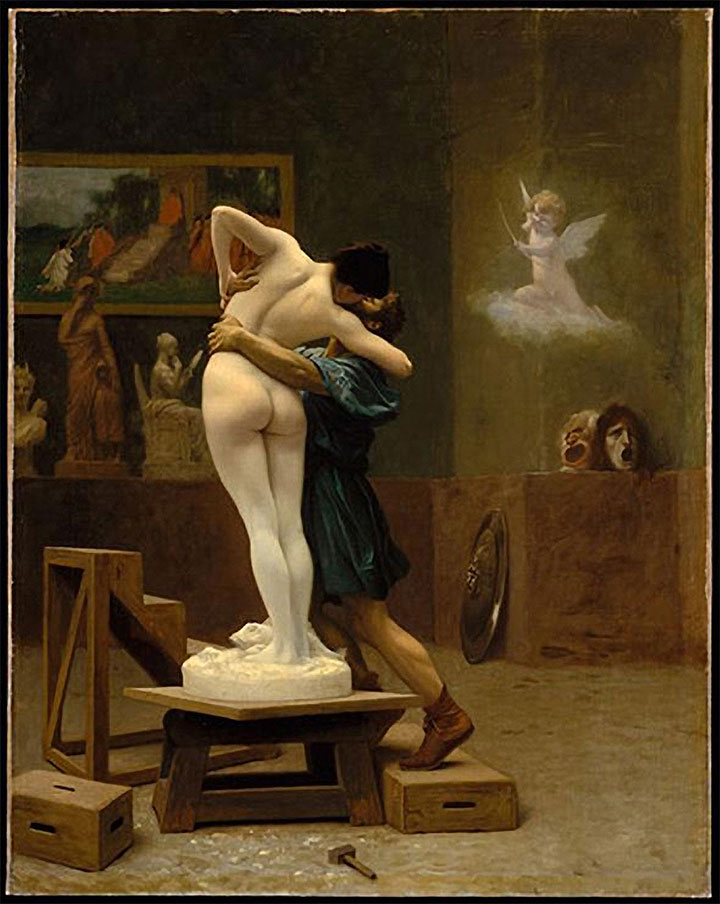 There used to be a very good South African restaurant in Amsterdam called ‘Pygmalion’, located at the beginning of the Nieuwe Spiegelstraat, a narrow street with art galleries and antique boutiques running all the way over the canals from the Herengracht to the Rijksmuseum.

I say ‘used to’ because, it is no longer there. They served quite an appetizing variety of sandwiches and the craziest evening dishes such as crocodile steaks, minced zebra, antelope and smoked ostrich, all skilfully prepared - the kind of food average South Africans would hardly ever come close to eating - paired with a selection of choice South African wines. The interior was done in rich earth tones and dark wood, and their walls were decorated with some fine African-looking art.

This triggered me to write a little something on the restaurant’s somewhat peculiar sounding name – Pygmalion. If you have never heard this word before, it might come across as a mix between a pygmy, a chameleon and a lion. Its origins, however, lie elsewhere.

Living during the reign of the Roman Emperor Augustus, the Latin poet Ovid, short for Publius Ovidius Naso (43 BC - 17 AD), wrote his magnum opus, the ‘Metamorphoses’, a continuous narrative in rhythmic verses considered to be the ultimate grand style of classical poetry, covering almost 250 myths in fifteen extensive volumes, cataloguing and describing the transformations in Greco-Roman mythology from the emergence of the cosmos to the deification of Julius Caesar. He completed them in 8 AD and are today still considered to be one of the main sources of our understanding of classical mythology. Pygmalion, as a character, is introduced in the tenth volume, which focuses mainly on doomed love. Tales of mortals being turned into new bodies such as animals, birds, flowers, trees, rocks, and so on, follow one after the other.

In a nutshell, Pygmalion is portrayed as a Cypriot prince with a passion for sculpture, who could not find a woman beautiful or right enough to suit his taste for marriage. He then decides to carve her from a large chunk of marble and gives it everything he has to make her look just perfect: a life-size prototype of a woman he really would not mind spending the rest of his days with. Whilst he is at it, he starts falling head over heels in love with her, his masterpiece sculpture. He bought her clothes and dressed her to his liking, had dinners prepared for two, adorned her with jewellery, bathed her, talked to her and even caressed and kissed her for pleasure.

During a sacrificial feast in honour of Aphrodite, the goddess of beauty and love, she hears about his dilemma and grants that his sculpture turn from cold stone to warm flesh, blood and bone. She is given the name ‘Galatea’, meaning ‘she who is milk-white’. Pygmalion and Galatea marry with Aphrodite’s blessings, rule over Cyprus, have a son and a daughter, Paphos and Metharme, and live happily ever after. Pygmalion never missed thanking the goddess for the gift she had given him and, as a token of eternal gratitude, brought offers to her temple throughout the remainder of his life.

The tale is best illustrated with a series of three works by the French Neoclassical painter and sculptor Jean-Léon Gérôme (1824 - 1904), known for his academically flawless depictions of Oriental harems, snake charmers, wild beasts, gladiators and other exaggerated exotic-looking content influenced by his trips to Egypt, Turkey and Northern Africa. They were quite popular in France at the time. The first version of ‘Pygmalion and Galatea’ is a coloured marble sculpture and the other two are 69 x 89 cm (27 x 35 in) paintings, both completed in 1890. The sculpture functions as a study for the paintings. The paintings are actually quite similar, but differ in the sense that in the one we can see Galatea from the front and in the other from behind, in a way one actually looks at a sculpture. Gérôme depicts the myth at its peak, at the moment when Pygmalion experiences that his wish is being granted and that his creation’s heart is beginning to beat. The blush of life has already reached as far as her thighs, with the lower parts of her legs still in the process of defrosting.

The emotions are almost tangible and this in part demonstrates the quality of the paintings. ‘Pygmalion and Galatea’ is an allegory of artistic creation and the slippery path between the real and the ideal.

Gérôme’s ‘Pygmalion and Galatea’ series is dispersed – the sculpture is in the collection of Hearst Castle in California; Galatea seen from the front is in The Smart Museum of Art in Chicago, and from behind is in the Metropolitan Museum of Art in New York.